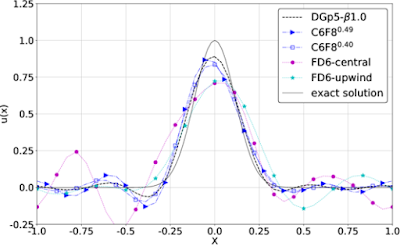 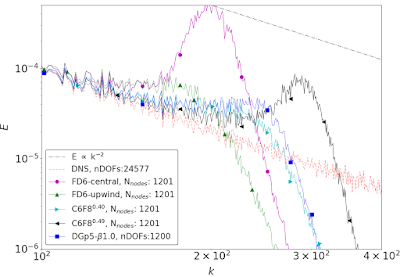 The potential of high-order methods (order > 2nd) is higher accuracy at lower cost than low order methods (1st or 2nd order). This potential has been conclusively demonstrated for benchmark scale-resolving simulations (such as large eddy simulation, or LES) by multiple international workshops on high-order CFD methods.

For industrial LES, in addition to accuracy and efficiency, there are several other important factors to consider:

For general-purpose industry applications, methods capable of handling unstructured meshes are preferred because of the ease in mesh generation, and load balancing on parallel architectures. DG and related methods such as SD and FR/CPR have received much attention because of their geometric flexibility and scalability. They have matured to become quite robust for a wide range of applications.

Our own research effort has led to the development of a high-order solver based on the FR/CPR method called hpMusic. We recently performed a benchmark LES comparison between hpMusic and a leading commercial solver, on the same family of hybrid meshes at a transonic condition with a Reynolds number more than 1M. The 3rd order hpMusic simulation has 9.6M degrees of freedom (DOFs), and costs about 1/3 the CPU time of the 2nd order simulation, which has 28.7M DOFs, using the commercial solver. Furthermore, the 3rd order simulation is much more accurate as shown in Figure 1. It is estimated that hpMusic would be an order magnitude faster to achieve a similar accuracy. This study will be presented at AIAA's SciTech 2018 conference next week. 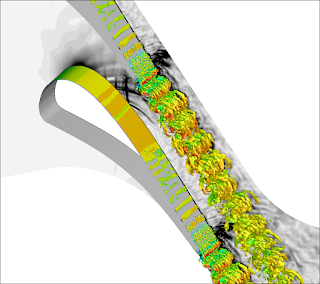 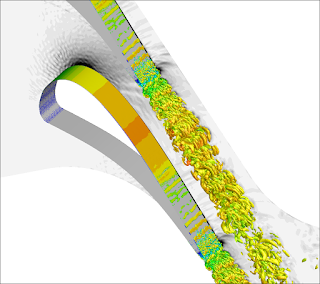 I certainly believe high-order solvers are ready for industrial LES. In fact, the commercial version of our high-order solver, hoMusic (pronounced hi-o-music), is announced by hoCFD LLC (disclaimer: I am the company founder). Give it a try for your problems, and you may be surprised. Academic and trial uses are completely free. Just visit hocfd.com to download the solver. A GUI has been developed to simplify problem setup. Your thoughts and comments are highly welcome.